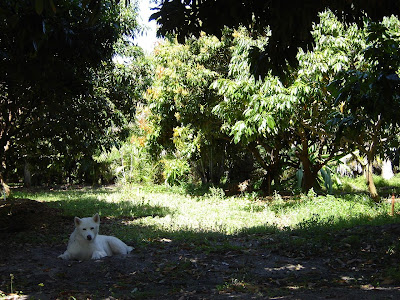 One of the things I remember from my younger years is being obsessively into Aldous Huxley (1894-1963), best known for his novel Brave New World, a dystopia of control over the individual and crass commercialism. The fact that The Doors of Perception was a companion of many travels, tucked inside my backpack, should say something about my interests back then. But there's a third book by this great author, Island, that hasn't received as much attention as the other two I mentioned.
Island was published in 1962, shortly before Huxley's death. It deals with ecological problems, like pollution and overpopulation, and proposes ways by which an enlightened, truly free people could overcome them. In that sense, it's about balance, making the right compromises between technology and respect for nature, personal freedom and the welfare of the community, the ying and the yang.
Balance is what came to mind when visiting Michael Wallace's Pine Island farm again, a few days ago. The right compromises. A lot of the work is done by hand by Mike and a handful of volunteers, but there's an orange Kubota tractor parked somewhere, ready for action. Most of the produce is grown using organic methods, but seeking an USDA certification would impose such an effort on the small farm, that it's not even discussed. Fine, one of a kind gourmet herbs and vegetables are grown, but without forgetting our tropical staples: sweet potatoes, peppers, mangoes, papayas. And so on and so forth.
Island, the novel, had a lot of Eastern, Oriental elements to it, as does Island Botanicals, the farm: from farmer Mike's fascination with design elements from the Far East, to the large Ling tree and clusters of mature bamboo everywhere, used for trellises and light construction.
In another post a while ago, I mentioned how much I respect Mr Wallace's approach to growing food in this part of the world, and what a great place his domain is; I won't go there again, but I wanted to add that Mike Wallace is one of the few local farmers I know who is making a serious effort at widening the range of what can be grown here in the summer, a tricky season in South Florida. Efforts have been underway to increase the area under shade, new and old crops are being tried, and hopes are high for the upcoming hot months.
Island Botanicals brings vegetables, herbs, fruit, microgreens and fresh eggs to the GreenMarket every Saturday morning, and has built a loyal clientele that keeps coming back for more. So there's another ying and yang there, I guess: making a decent living and conducting a business successfully, without losing touch with the soil, the ultimate realities of toiling under the sun to slowly create a meal out of a seed or a cutting... and keeping a healthy sense of humor in the process. Hard to achieve all this, but not impossible, as this Pine Island farmer proves Saturday in and Saturday out.
Don't forget to check out some pictures of Mike's farm during a recent visit here, or to visit the Alliance for the Arts every Saturday morning to see what's growing in Pine Island.
Posted by Santiago De Choch at 4:02 PM 8 comments: 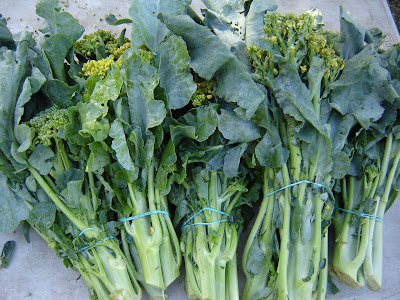 Exciting things happening at the GreenMarket! The GreenMarket at the Alliance of the Arts will stay open through the summer, offering fresh local products to residents and visitors, including: locally caught fish, local honey and eggs, fresh fruit, herbs and produce, bread and baked goods, plants, organic fertilizers and garden supplies, organic skin care products, non-toxic household cleaners, gourmet cheeses, chocolate, and coffee, as well as t-shirts, pottery and handicrafts.

New summer hours starting in June will be 8am to 12 noon. The GreenMarket provides plenty of shade under the old mango trees, it's kid friendly, with many free artistic and educational activities oriented towards the little ones, and pet friendly as well. Live music is played on select Saturdays, and customers are welcome to visit the art exhibits at the Alliance of the Arts building and the various shows and activities at the amphitheater area, on the other side of the main building.

We're proud to announce that all 4 farms with a presence at the GreenMarket plan on bringing fresh, locally grown produce, herbs and fruit during the difficult growing season of the Summer, in the months of June through September. These are all bona-fide growers, receive periodical inspection visits and have been bringing 100% locally grown veggies, some of them using organic methods, although not USDA organic certified.

In addition to seasonal Florida staples such as avocado and mango, the GreenMarket growers plan to have a variety of produce available: heat-resistant Everglades tomatoes, egglplants, peppers, okra, zucchini, yams, leaf vegetables, Muscadine grapes and more, in addition to a variety of herbs both freshly cut and potted. Microgreens (sprouts) are available as well. For a limited time, the GreenMarket will allow some non-local produce, clearly labeled and not imported, to supplement any shortages of locally grown staples. The main focus of the GreenMarket continues to be providing a suitable venue for connecting local farmers with socially and environmentally-conscious buyers, as well as fresh food enthusiasts.

The GreenMarket continues to spearhead efforts to turn Lee County's attention towards more sustainable practIces, encouraging the recycling of used cell phones and printer cartridges as well as paper and plastic, glass and aluminum containers.

Another area the GreenMarket is bringing innovation is in the availability of 100% organic worm tea as a bio-fertilizer. The compost tea is safe to use on any plants, both on roots and as a foliar, even during the rainy season, when City and County ordinances prohibit the use of chemical fertilizers. This bio-fertilizer increases growth and yields significantly. This compost tea is locally produced during the week, and customers are very welcome to bring their own gallon or half-gallon reused milk and juice jugs - this ensures a lower price for the product, and limits the proliferation of plastic containers, in however limited a capacity. Local gardeners and farmers strongly endorse this product, and everybody is encouraged to take home free samples of the compost tea and check out the results for themselves.

Finally, Sloan-Greaner Enterprises, GreenMarket's authorized Wow Green environmentally friendly cleaning products vendor, announces USDA Organic certification for its line of organic skin care products. With the use of these gentle and minimally processed creams and ointments, you leave a number of noxious chemical out of the equation of personal and skin care. All organic skin care products are available as samples in small sized containers, ensuring the customer has the ability to select what works best for her.