Losing it all to sprawl 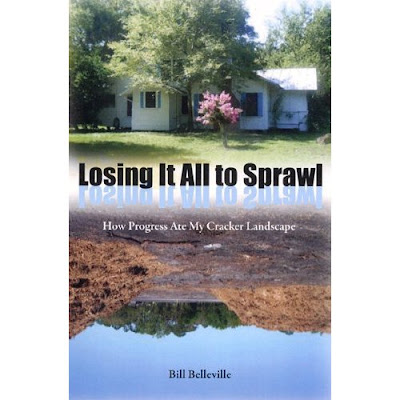 One of the strongest impressions on my arrival to Florida almost a decade ago was to see acre upon acre of landscape, sometimes as far as the eye could see, razed down, leveled, resembling something from "Apocalypse Now" or the fire bombing of Dresden described by Kurt Vonnegut, with piles of tree trunks here and there in lieu of shells of destroyed buildings.
To make way for "development" - oh, how I hate that word. And I'm not the only one. Author Bill Belleville describes how his "cracker cottage", a modest house built many decades ago, back when you had to reach a compromise with the environment instead of destroying it, gets surrounded, and ultimately swallowed, by a new shopping mall, with its "parking lagoons" (in the expression of JH Kunstler), its accessory plazas full of pet grooming and nail shops, the big box retailers, and the cookie cutter housing, each unit with its manicured lawn and exotic landscaping, always thirsty, always hungry, demanding huge quantities of water, fertilizers and pesticides. And the road "improvements" and tax breaks necessary for this growth - this cancer.
That Mr Belleville can describe all this with sadness, but not lose his sense of humor, is part of what makes this book great. A dark sense of humor, granted. "... Disston planned to buy most of the soggy interior of Florida for 25 cents an acre and drain it dry in the late XIX century. Disston didn't have the technology we have today, and while he turned miles of pastoral, meandering rivers and streams into arrow-straight canals, he botched his larger mission. Taking his failure to drain Florida personally, he ended up back up north somewhere, blowing out his brains in a bathtub, a method that seems at least considerate of others who had to clean up the mess behind him. Less can be said for his drainage vision - a muddle we have not yet reconciled."
A muddle indeed, a strategy of growth at all costs, and consequences be damned, cheered on by chambers of commerce, politicians and newspapers. The author's is one of the voices that we need to hear if we're going to be smarter about how we do things in Florida. We have done enough damage already. It's clear we have to accomodate a number of pressures, and reach compromises. But nature and quality of life can't always get the short straw against commerce, low wage jobs, and car-centric development.
This book is not just about preserving the environment, but it's more like a picture of what it means to live here at this point in time, that combines many elements and impressions. There's passionate and learned descriptions of nature, scientific explanations of underground water tables and how they get affected by growth and create sinkholes, historic sketches of the Old Florida ("before Disney came and created his World"), interactions with slum lords, retired people, developers, the homeless and many other persons and groups, all with their own points of view. It's a portrait of a place and a time, taking into account where it comes from, what's happening now and where it may be headed if we don't stop, take a deep breath and a long hard look, and think hard of how we inhabit the land and treat nature. I'll just leave you with a couple of paragraphs of Chapter Ten, that show how many different elements are combined in Mr Belleville's writing, and give you a good idea of the style and content of the book:
"Yesterday I saw a man fly through the air. Today, during a bad strom, a live tree toppled over, blocking Sewell Road. The gopher tortoise that once dug a burrow at the edge of my backyard has returned after an absence of more than a year. Termites have continued to make their own tiny burrows into the wood of my house, causing the floor to sag just as my yard now sags with the collapsed veins of the karst below. And someone has sprayed the tree trunks in the woods to the south of me with an aerosol can, leaving each with a stripe of bright fuchsia-colored paint on its bark. At first I thought the spraying was an act of vandalism. Then I realized it was a way to inventory trees in preparation for development of the land.
The flying man, of course, was the most inescapable vision. I was driving the dangerous and congested I-4 back from Longwood yesterday when, less than a quarter mile ahead, I saw a van abruptly careen across three lanes. It then tumbled off the road and down a slight embankment to the parking lot of a rest stop. As it rolled, great gusts of white smoke billowed from its undercarriage, and a middle-aged man wearing dark pants and a t-shirt flew out of a passenger door, cartwheeled high into the air, and then came down hard on the concrete. Blood and bone splattered about him when he landed for human bodies are very fragile creations. He shuddered like a deer might shudder when it is fatally shot, and then did not move. He was dead, and there was nothing anyone could do about it."
Posted by Santiago De Choch at 7:14 AM No comments:

Why we will never have universal health care coverage 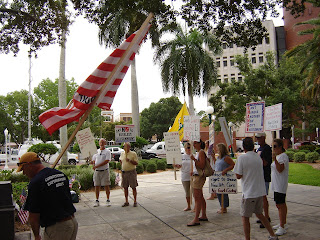 Posted by Santiago De Choch at 5:45 PM No comments: 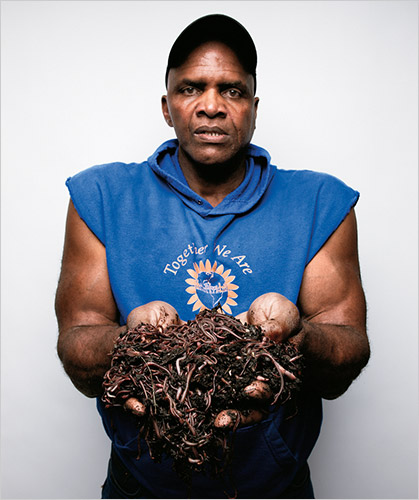 A great, 4-page story in today's NYTimes magazine, about a mythical figure, street farmer Will Allen, a guy with so much good thinking, common sense and simplicity, it's a real pleasure every time I find something about him. I hope to meet him one day...
"In 1993, Allen, looking to grow indoors during the winter and to sell food closer to the city, bought the Growing Power property, a derelict plant nursery that was in foreclosure. He had no master plan. “I told the city I’d hire kids and teach them about food systems,” he said. Before long, community and school groups were asking for his help starting gardens. He rarely said no. But after years of laboring on his own and beginning to feel burned out, he agreed to partner with Heifer International, the sustainable-agriculture charity. “They were looking for youth to do urban ag. When they learned I had kids and that I had land, their eyes lit up.” Heifer taught Allen fish and worms, and together they expanded their training programs."
Posted by Santiago De Choch at 7:21 AM No comments: 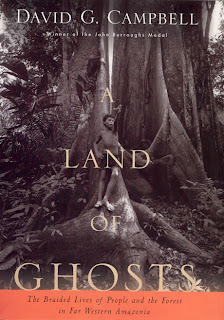